Only 1 left in stock

I present to you the second finished painting for the project “Shamanic Tarot” or “Tarot of Plant Allies”, which I will hope to publish sometime, it should be tarot cards inspired by plants and shamanic consciousness… This project will probably be created for many years to come… The first prepared painting is for the High Priestess card.

The painting is dedicated to “magic mushrooms”, especially Psilocybe.

For card archetype No. XV. The Devil for the project “Tarot of Plant Allies” I chose a special creature, “Magic Mushrooms”.

Somewhere far away, to the very edge of “Darkness,” the Devil settled. He sits on his throne and “rules,” perhaps we could rather say that he is trying to rule. He nailed two figures, a man and a woman. The man has a “divine nourishment” around him in the form of mushrooms, but as if he has not seen them, he prefers a beer to drink… And the lady is paralyzed, she can’t do anything.

The devil has his pentagram altar next to him, on which he has symbolically placed things with which he was able to bind the largest number of people: money, food, weapons, a computer and a man’s limb (hidden behind the devil’s right hand). He who submits to the Devil and allows himself to rule over him goes to hell with him, and there is no return, no help.

And so these “unfortunates” are there, and they would probably be there to this day, if a completely new “Entity”, a powerful and strong “Mushroom” did not appear. Without permission, the mushroom grew right in the middle of the Devil’s Altar, as if it had not frosted…

It was created from September to October 2021 and is available for sale, please contact me if you are interested.

The canvas is stretched on a wooden frame.

Ready to hang. Framing on request.

Contact me in case you want further information about the price

About the author Chrisantem Macháček 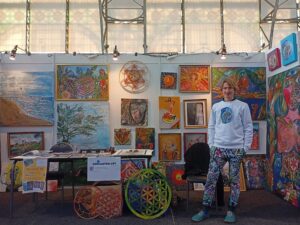 Chrisantem Machacek is a photographer, a painter and a draftsman from Prague, Czech Republic. See his paintings, drawings or photographs.
He started with photography at the age of 12, later he turned his passion into the official studies at the Department of Still Photography at the Film and TV School in Prague (FAMU). He regards the photography as a tool for sharing the beauty of “the physical world”. Later he expanded his focus into drawing and painting because he desired to share his inner visions with the public.
There are numerous experiences with “shamanic master plants” (Ayahuasca, Iboga etc.) behind his work. He is using them for the healing of his body and soul because of the profoundly unfortunate experiences he had lived through. If you like to learn more about plant medicines, visit his other project PachamamaHerbs.com (English) or Ladirna.cz (Czech language).
Chrisantem loves to paint in the bigger formats using the acrylic and oil colours. Each canvas is formed layer by layer, taking many hours to complete. He does a lot of thinking & sketches envisioning the final result.
In the photography he prefers to use a middle format camera with a black&white film. The time in his dark room where he enlarges the photos on the silver print baryta papers is like a meditation for him.
Chrisantem thinks that the creation of an art is a sacred state of being, completely thoughtless. Only an art, only the creation, only searching, exploring and transforming.